Information and tips for tyers, as well as information on hatches.
Post Reply
73 posts 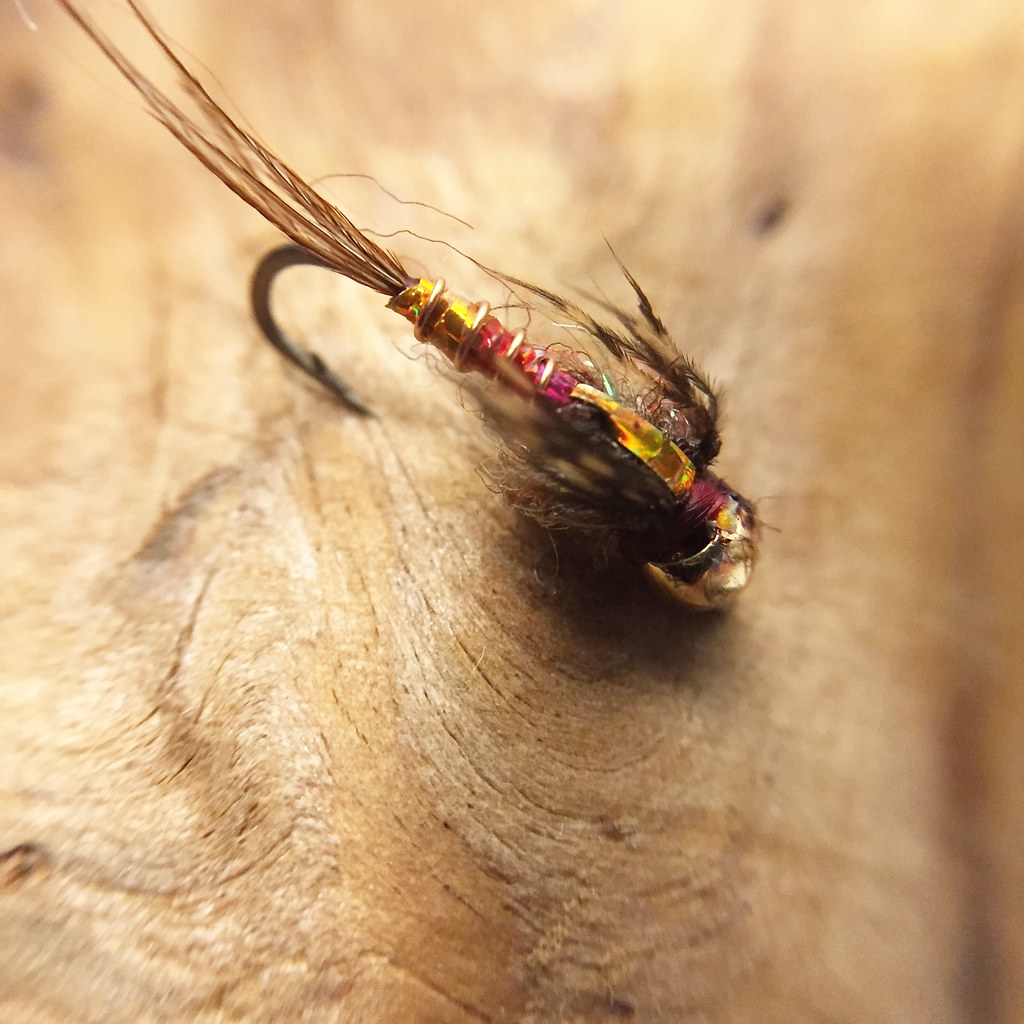 The Dreamcoat
****I don't claim to invent this at all! I just started tying this up after tying rainbow warriors. Using some of those principles (tinsel underbody) along with basic nymph pattern stuff, I started tying this. It's been a good producer for me, especially on trips to Colorado. One of the things I like most about this is that you can have a lot of color variation with it. Depending on what stretch of holographic tinsel you use, you can get a different gradient of color. So, the recipe below is a general guide, and it's what I used for the bugs I sent out, but the only staple is the holographic tinsel, IMO. That's the technicolor dreamcoat part!

Steps:
1. Attach thread and run a solid layer to the back of the hook. (Don't forget bead, like I just did for the instructions)

2. Catch in 4-5 pheasant tail fibers for the tail.
3. Attach 4 inches of copper wiring.
4. Attach about 6 inches of holographic tinsel.
5. Run the wire back up to the bead.
6. Begin wrapping the holographic tinsel. If you want it one consistent color, just wrap once, move ahead, and wrap again. If you want more color variation (gradient) in the underbody, you'll have to wrap in one place several times before moving ahead. (Until Yellow turns to green, or blue turns to purple, orange to red, etc.). I've found to get the full spectrum of color you have to wrap it a total of 15 times or so.
7. Wrap thread around tinsel near base of the bead to secure the tinsel wraps. Fold tinsel so it sticks out in front of hook. You'll still need it for later.
8. Counter wrap the wire around tinsel.
9. Wrap thread around wire near base of the base. Twist the wire into a clean break by whirling it around in circular pattern until it breaks.
10. At this point, if you have some Loon Outdoors Thin UV, You could coat the body so it's nice and strong. I believe I did this to the majority of the bugs I sent out.
10. Fold back the tinsel to about 1/4 of the way down the hook. Secure with thread.
11. Apply a pinch of dubbing to the thread for the thorax. Wrap dubbing back to the base of the bead.
12. Take a small feather from hungarian partridge skin (any good soft hackle will do). Gently pull back fibers from the tip of the feather, so it makes a V shape, except for the tip (maybe a 1/8 of an inch left on the tip of the feather?)
13. Cut the tip of the feather. Fold back the feather fibers so you have a nice open V at the end of the feather.
14. Attach this feather as the wing over the thorax. The stem of the feather shouldn't reach past the bead--it should only be the fibers that actually get attached to the fly, not the feather stem, too.
15. Once wing is attached, pull the holographic tinsel back over the thorax, using it to nicely divide the wing. Wrap thread to secure tinsel and whip finish.

Got my flies done this past weekend between the end of my kid's basketball season and the NFL playoff games. I did 20 Wilted Spinach soft hackles; 10 each of two different color combinations. I will post a pic and instructions sometime soon.
Top 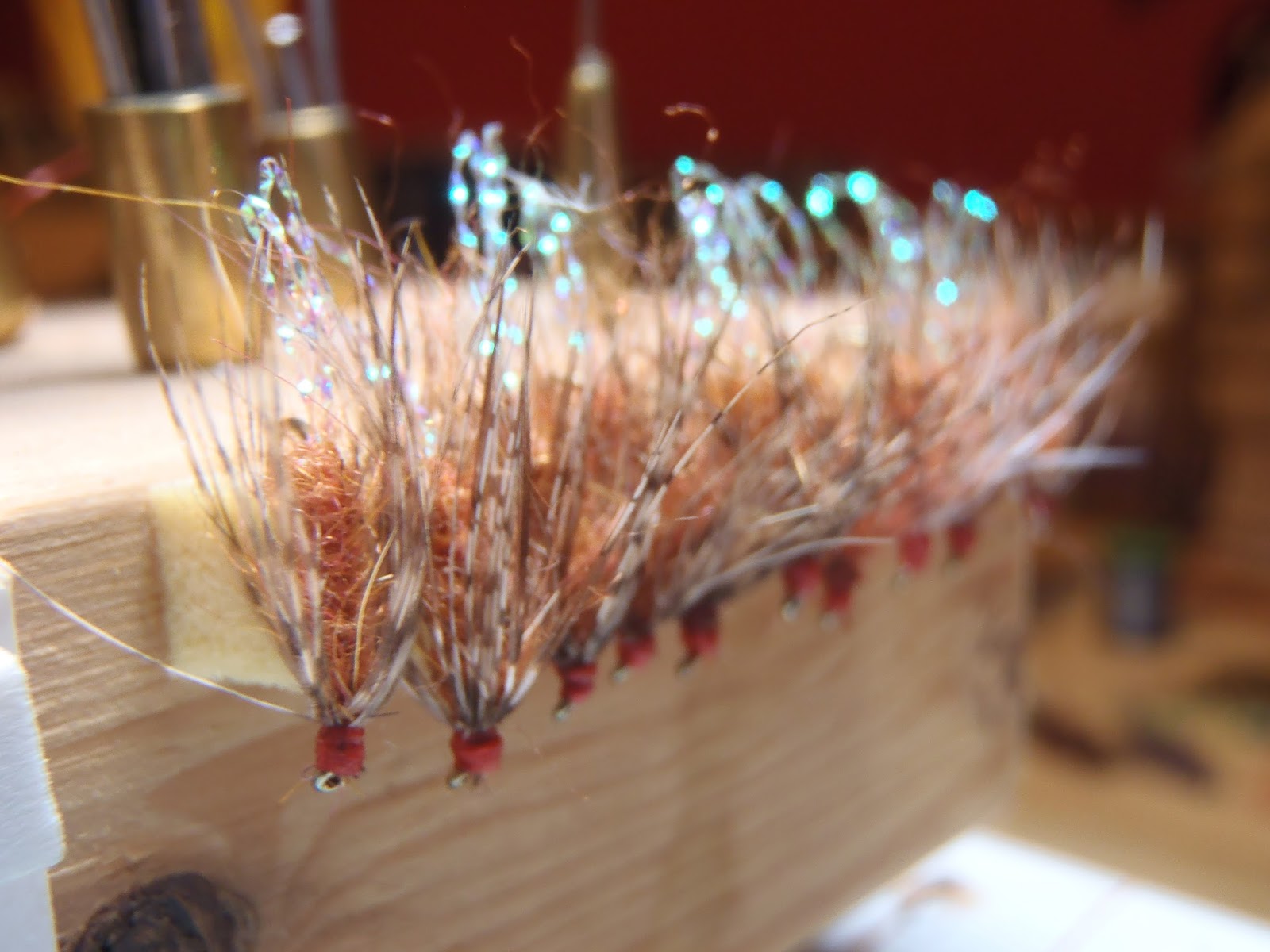 
"Simple soft-hackled wets were first tied more than a century ago for hill-stream trout in the border region of Scotland and England. They were tied using sewing basket silks and the feathers from on occasional poached partridge or other land bird. That's all the tiers had available, and they made it work. Sylvester Nemes, in his brillian book The Soft Hackled Fly, brought these flies to the attention of American anglers. His flies, and the basic methods he uses to fish them, still take trout well to this day." - Dave Hughes, Essential Trout Flies, page 74

In 1999 John Montana added to the soft hackle pattern library when he designed the Wilted Spinach. I've used the fly since with great success. Sometimes I forget about it and it's always good to come back. Its application is general here in southeast Minnesota: it's a leggy and buggy looking fly with a trailing shuck indicating the moment of vulnerability which is something trout seem to appreciate.

Swing it downstream (especially in winter to trout rising to midges) or fish it upstream as you would a dry fly. Hughes notes that originally, two or three soft-hackled wets were used on the same leader.

I didn't cement the brown thread versions because that is smaller thread and should hold tight on its own.

Youtube will show you a Wilted Spinach variation without dubbing and with peacock thorax, tied by Winona Fly Factory.
Top

Gents, my apologies for not posting pics and recipes for the Zelon-Musk Midge and the bonus Ostrich Herl Midge Pupa (both of which Randy has). Not able to get a decent pic; but will try again tomorrow.
Top

I was still one package of flies short of a swap by the time I hopped on a plane yesterday (Sunday). Will send out to everyone when I get back as long as it's been sent already.

That's probably me. The flies are done. I had it my head that we'd meet for a beer at some point. I can mail them if that'd be better.
Top

I think we should rally for a swap meeting at LTS. Open invite and whoever can make it, does so. Even if it's just me (ha).
Top

Wendy Berrell wrote:I think we should rally for a swap meeting at LTS. Open invite and whoever can make it, does so. Even if it's just me (ha).

Maybe start by confirming when Randy will be back.
Top

And for those of us in the Super Bowl-crazy metropolis, where/what is LTS?
Top
Post Reply
73 posts